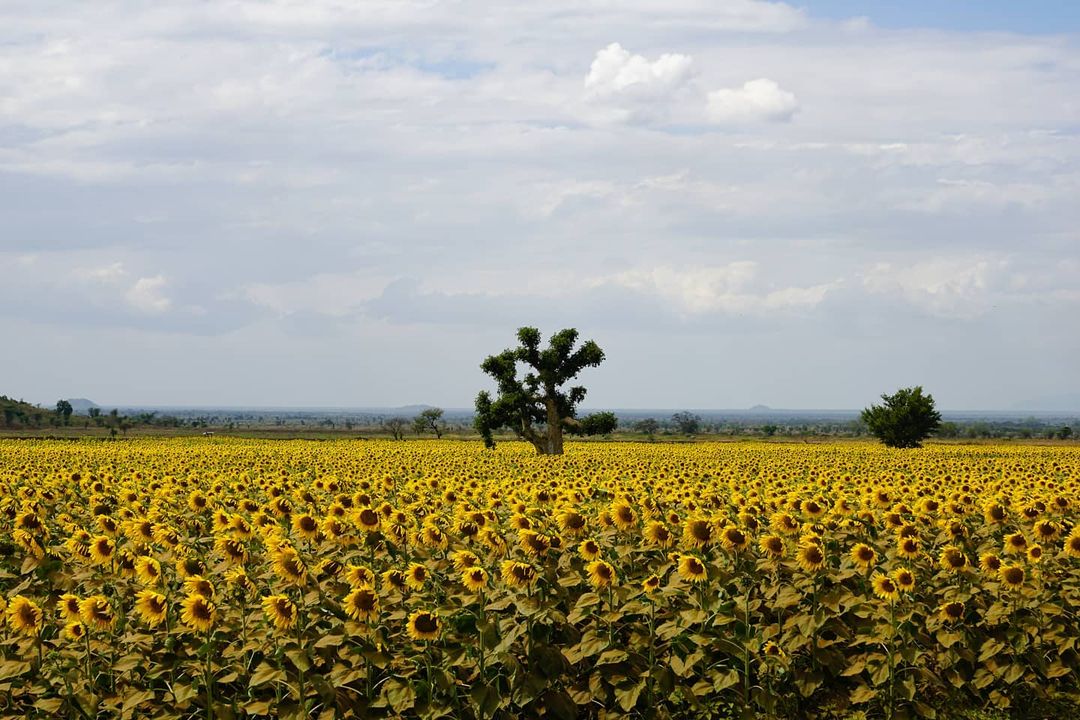 Omara Sam, a member of Dwok Can I Kweri farmer group, in Kot Omor sub-county, Agago district, is among the members of his group who have started on the path of “building on farming”. Below is the story of how Omara and others in his group were inspired to embrace this dream.

In 2019, Omara Sam a 27-year-old farmer along with other members of Dwok Can I Kweri farmer group were enrolled in the NURI programme for support under the Climate Smart Agriculture (CSA) component. This youthful group was taken through different sessions including enterprise selection and trainings in CSA practices. “I have received trainings from 2 different organizations already, but I think these NURI trainings have been the most practicable and profitable to me”, states Omara.

Omara, who is a husband and a father to 2 children, noted that being the group secretary was an inspiration to him. “As a leader, you want to be exemplary”, he said. “I tried my best to attend these trainings and apply them in my gardens,” Omara added. When NURI approached Dwok Can I Kweri group in 2019, Omara, based on previous experience, almost didn’t want to participate. “I thought to myself, this could just waste my time”. But his group selected sunflower and the first trainings were started in the demonstration field setting, and Omara felt his time was well spent.. “The way the site was selected, the set-up of the field and land preparation? These were new to me. I had never planted sunflower before, and thus these were hands-on trainings that suited me.”

In that year, NURI would provide Omara’s group with 2kgs of hybrid sunflower seeds to plant in the demo and provide training activities. “After planting in lines, the NURI extensionist took us through weed management, pest and disease control and management; and at the end of it all, the 1 acre of sunflower produced 365kgs of grains that we shared amongst the group members.”

The way the site was selected, the set-up of the field and land preparation? These were new to me

With this, Omara’s “eyes were opened”. In 2020, Omara opened land and planted 3 acres of hybrid Sunflower seeds. “This was my firsttime planting sunflower, bar the previous year’s demo garden”, noted Omara. The 3 acres, according to Omara produced 18 bags of grains which was 1,080kgs. Omara sold the 18 bags at UGX 1,400,000/-, an amount of money he had never handled before.

But what did Omara do with his ‘Farm money’? “I thought to myself, if NURI had come a few years earlier, I would be in a proper home by now!” explained an excited Omara. Therefore, Omara decided he would build a permanent house. “I therefore immediately decided to start gathering materials for my house,” said Omara. Omara spent UGX 500,000/- on laying 8,000 bricks also bought 2 loads of Redstone and 3 loads of sand at UGX 110,000/- and UGX 180,000/- respectively.

When asked what he did with the remaining money, Omara’s face was lit up by a smile, pointing under a big mango tree in his compound, “….but I also bought a heifer at UGX. 400,000/-…..” The rest of the money, Omara said he reinvested in buying more seeds and other inputs for the 2021 farming season.

What next for Omara? While Omara claims that there are a lot of problems with pest at germination stages, weather challenges, as well as difficulty in accessing hybrid seeds, he has planted 3 acres of sunflower in 2021 and hopes to commence construction of his house by the end of the year. The farming seasons having been good for Omara because his family is supportive. “My wife is a very supportive woman and training that I received in Sexual Reproductive Health and Rights (SRHR) have significantly reduced quarrelling and unnecessary stress in my home”, Omara noted. Not only has it promoted peace in Omara’s home, but also the level of respect and productivity in the home.

What does Omara have to say to other farmers? In the end, life is what you make it, says Omara. While he noted that the farming practices promoted by NURI is labour intensive and demanding, he encourages farmers to consider adopting them. NURI’s methods increased utilization of a small area while increasing production.