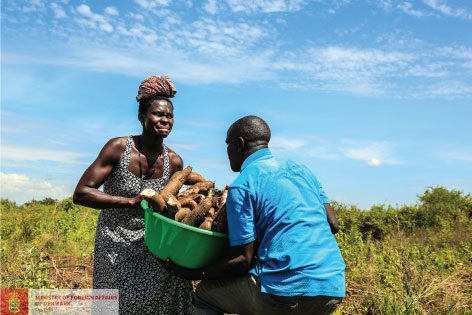 It was one dark evening when I lost my father at age 12, “I felt the world had crumbled on me”. Two years down the road my mum got married and left us with my younger sibling. I was the head of the household by then. My predicament prompted me to get married at the age of 16 which worsened the situation. At 25yrs in 2019, due to the difficulty of raising 04 children I had with my alcoholic husband, we divorced and I returned to my paternal home with all the 04 children. It was yet again a very hard moment in my life to raise my children as a single parent.  Upon arrival back in my paternal village, I joined Ondukani Women Group to gain social support. It was the same year NURI programme considered our group for support in beans production which was the enterprise my group selected. Additionally, the group had an active VSLA which was started as a group initiative.

Since my cultural norms didn’t allow me own land, I started engaging in borrowing land from my friends to grow the beans that we received from the group multiplication site (demo garden). Last year (2020), I produced 420 kgs of beans and sold 240kgs at 830,000 Ugx which added to the 900,000 Ugx I saved with the group’s VSLA totaling to 1,730,000 Ugx.

It was a game changing moment for me, I constructed a single roomed semi-permanent house and brought back my mother home to take care of my children as I focus on my productive work.

Moreover, I procured 8 plastic chairs, sub-hoofer (music system), solar system for lighting my home, and 6” mattress.  I also bought some productive assets including 3 pigs and 2 goats, and I rented 3 acres of land for my beans production this year (2021). In Ondukani Women Group production and marketing plan, Driciru is among the highest producers. Apart from the farming and savings activities that I am fully engaged in, I also do home saved bean seed business. I buy beans during surplus (harvesting) period from the group and community members at 2,000 Ugx per kg. Thanks to the NURI marketing trainings, I sell each kilogram at 3,600 Ugx or I loan out beans to the group members and for each basin of beans (60kgs) during the planting (scarcity) period. The borrowed seed is returned with an interest of 20,000 Ugx per basin.  I use the proceeds to buy more beans during the surplus period.

“Currently I have 600kgs of beans in my store ready for loaning out and for sell”, and I have also already received orders from my group members for the second season (2021) cultivation. In the next five years, “I want to see myself as the supplier of bean seeds to the farmers in Terego district” with the potential of offering seed loans to my fellow youth such that we demystify the notion that agriculture is not a rewarding venture. I also want to buy my own land for my beans production and have a stable family.