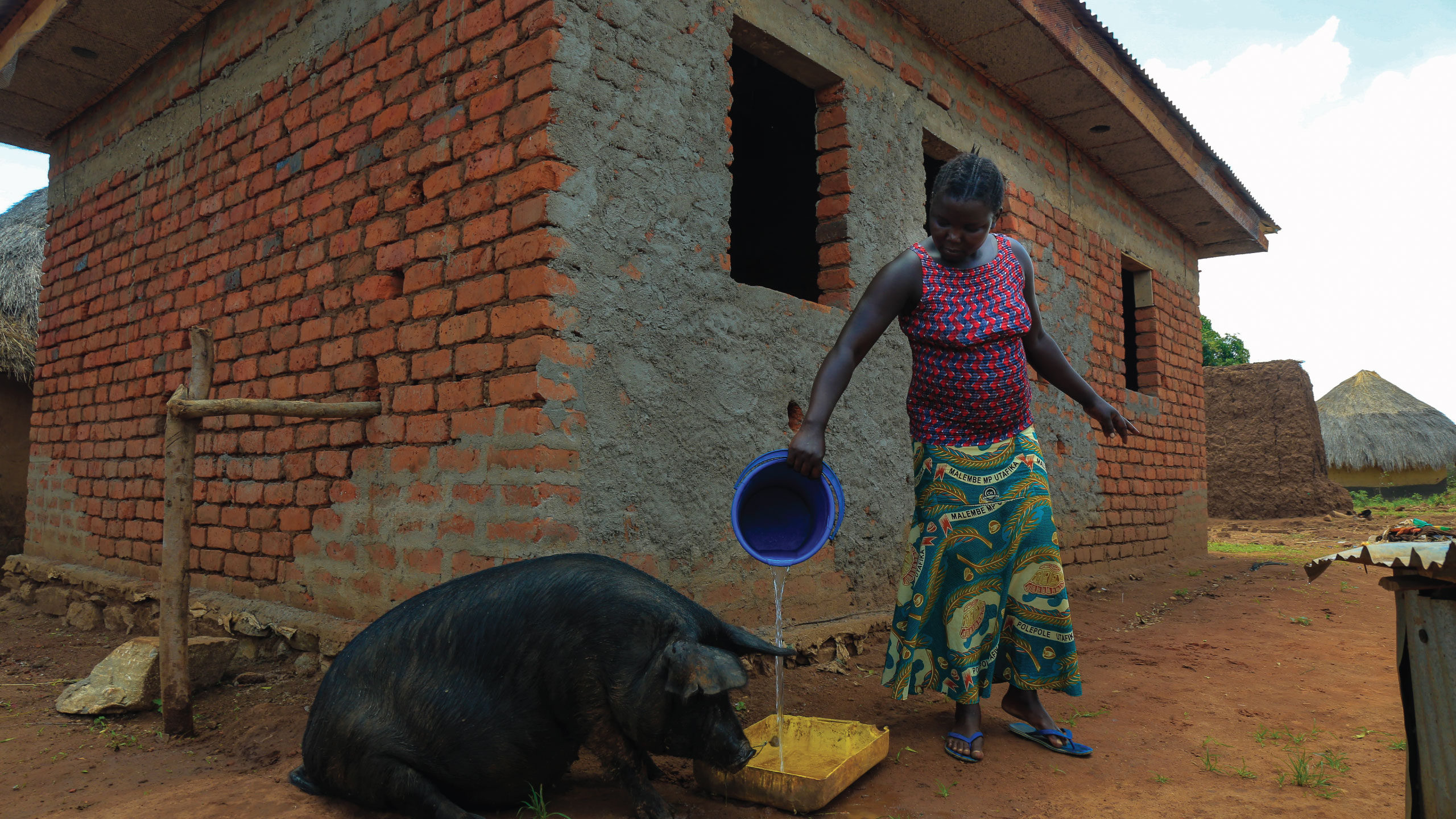 From Darkness to Light: AKUMU Julia is Now a Happy Farmer.

Julia is a 56-year-old wife to a 65-year-old man. Together, Julia and her husband have 5 children. Julia is a woman whose life is purely based on subsistence farming. Throughout her marriage, Julia’s life has never been easy. She had to cope up with living with a cowife since her husband married another woman a few years after he married her (Julia). In 2019, Julia whose main focus for years had been to fend for her young children, joined a local community group called ‘Deg Bedo’ in Pubech Parish, Mucwini sub-county, in Kitgum District. The group’s major objective was “union through savings while at the same time, support each other through social occasions”.

The Turning Point: In 2020, a “once-in-a-lifetime” luck came hitting at Julia’s door, according to her narration. Julia’s group was assessed and chosen for support by Resilience Agriculture Unit (RAU) Kitgum under the NURI programme. In as much as she wasn’t sure of how this would turn out, Julia said she paid close attention to every detail during CSA trainings. “…My major challenges were associated with planning, even though I worked hard most times….”, Julia said. Her problem was how to schedule farming activities and manage her produce yet she worked really hard in the garden. “The training on the concept of PMP development that our ‘teacher’ came with, to us was so handy and helpful”, Julia added. Her Production and Marketing Plan (PMP) goal was clear, that she would live in her own permanent building by the end of the 3 years. In fact, Julia added that she would name that building, “Lapur Okecu” which is a phrase ‘loosely’ interpreted to me, “a farmer is also capable”.

Deg Bedo farmer group chose to undertake Sesame production in the programme, however Julia’s love for sunflower production was as much. “……I chose to transfer the knowledge I gained during sesame demonstration establishment to diversify my income in my sunflower garden and with the support of the ‘teacher’ from NURI, I used appropriate spacing for my sunflower plants……”.

2021 has been the best year of my farming life… I could not believe it at first and I thought the selling price would be low, but at the turn of the year, our group chairperson called us to bulk our sesame produce together because there was a buyer willing to pay 4,000/- for every kilogram.

In her first year of production, Julia planted 1.5 acres of sunflower from which she harvested 4 bags and 1 acre of sesame in which she harvested 2 bags. She sold the 4 bags of sunflower and 1 bag of sesame and got a total of UGX. 500,000/-, the highest she had ever gotten until that time, according to her. This money, Julia translated in to brick laying to support achieving her “PMP goal” of constructing a permanent house.

With the excitement of achieving part of her PMP, Julia stepped up in 2021. She took another step in to her PMP. She felt her dream was getting even closer than she ever imagined. Julia even wondered why NURI didn’t come before 2020. “…2021 has been the best year of my farming life…” Julia planted 6 acres of sesame and with constant support from the NURI field worker. From it, Julia harvested 8 bags. “……This was magnificent. I could not believe it at first and I thought the selling price would be low, but at the turn of the year, our group chairperson called us to bulk our sesame produce together because there was a buyer willing to pay 4,000/- for every kilo……” From this sale, Julia received UGX. 3,006,000/- and embarked on her building mission.  “My ‘Lapur Okecu’ has now reached roofing level”. Part of the money, Julia used for buying industrial materials and for construction labour. The rest was used to pay school fees for all her children.

In 2 years, Julia has already achieved her 3-year PMP goal. Nevertheless, Julia still has plans for 2022. “I want to work even harder and acquire a plot of land in our rapidly developing centre here”. But first, Julia wants to access loan from the group Village Saving and Loans Association (VSLA) supported by NURI to start a piggery project to generate extra income with her 2022 plans.

I am a much happier woman now and all thanks to NURI, Julia said. A more astonished Julia added that NURI took her from darkness to light in a space of just 2 years. She wishes all the best for other farmers and hope they could adopt the new farming practices that NURI brought in.